In early 2011 I was approached by John Hudson of TIRO typeworks, seeking my help in one of the many projects he managed at this time. Microsoft had commissioned a new Arabic typeface from TIRO which was – once again – intended to push the boundaries of what is currently possible in OpenType fonts. For this showcase, Microsoft wanted an Arabic display typeface that would demonstrate what can be done with the current state of technology. For this task, John teamed up with Tim Holloway, Fiona Ross and Mamoun Sakkal. It was decided that a contemporary interpretation of the Diwani calligraphic style would be the direction of the project, in which Tim would design the artwork, Fiona and Mamoun consult, and John handle the technical implementation. A detailed account of their collaboration is given in this talk by John.

My contribution to the resulting and impressive typeface Aldhabi was relatively modest. Based on the style of Tim’s design, I was to draw a range of honorific ligatures like the common Bismillah, the Muslim exclamation ‘In the name of god’, as well as a series of ornaments and decorations which echoed the feeling of the typeface.

For me this was a fantastic opportunity, for Tim is one of the best type designers alive, especially in the Arabic domain. His creations have been an inspiration ever since I began to work in Arabic type design myself, and collaborating with him was humbling and enriching. He provided suggestions for directions, without imposing views, and impressed me with the fabulous quality of drawings which he would simply show as design ‘sketches’. My aspiration was to live up to the standard his Aldhabi design set, and provide ligature drawings and ornaments which sat comfortably with the type.

Whereas the type’s style was well defined, the ornaments left open more room for interpretation. A fair amount of experiment was required to arrive at designs which complemented the typeface. Tim’s suggestion to draw inspiration from Iznik ceramic glazing was excellent, but reproducing the fluid, organic qualities of these brush strokes proved difficult with the precision of vector drawings. In consultation with Tim I made ink sketches by brush, in order to find the desired aesthetic. Eventually, a whole set of various ornaments were chosen and included in the final Aldhabi typeface. 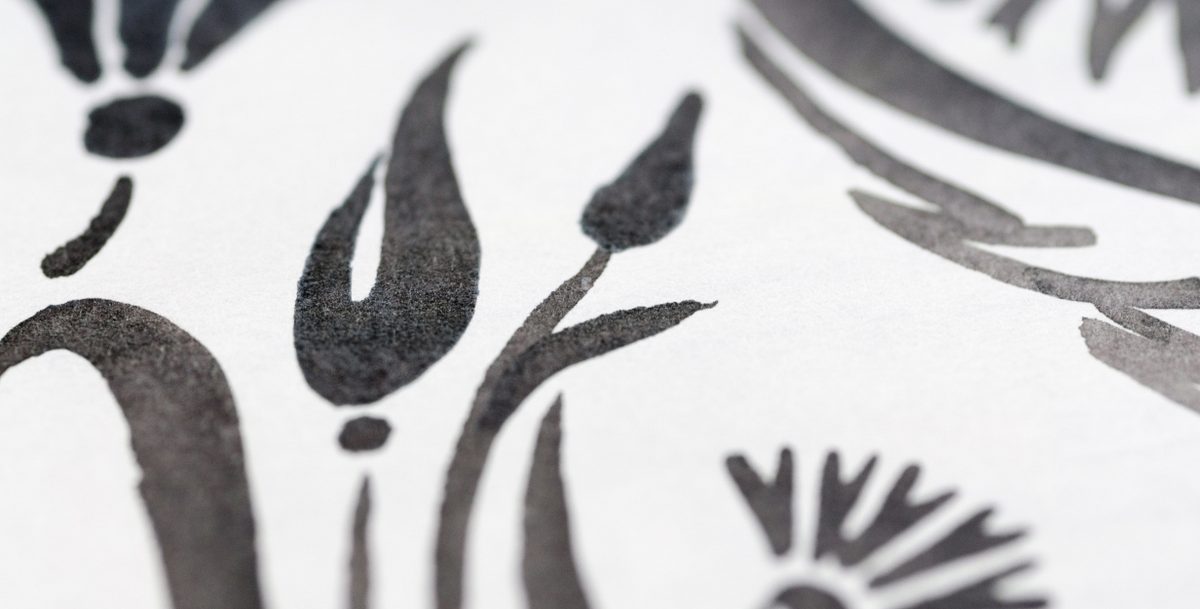